We bought a half pig from Hatch-a-Bird and got the fat ground when we had Village Meats do the cutting. What an excellent job they both did. 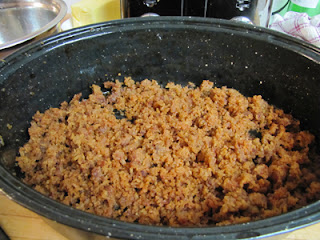 We took the ground pork fat and put it into our largest roaster and put it in oven at 315 F. Anywhere between 300 & 325 would be good. 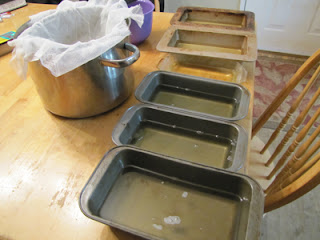 Allow the lard to cool on the counter for a bit. It looks golden during this stage, but it will become white when it is finally cold.

When it is still warm, pour the lard & cracklin's through a wire sieve. Chill cracklin's and freeze in a flat layer in a bag for use in corn muffins and such.

Line a wire sieve with cheese cloth and pour the fat into clean loaf pans. Freeze the lard and the next day, remove it from the pans and store in freezer in plastic bags. If you freeze it less than one inch thick, you will be able to break off chunks to use in cooking more easily.

Processed lard lasts in the freeze a very long time, but once you put it in the fridge, you should try and use it within a couple months.
ramblings of Nicole Narbonne