I had a small crisis when my pressure cooker finally failed after years and years of service. Luckily my friends had been exclaiming about how the new "Instant Pot" is a fabulous replacement for the traditional pressure cooker, rice cooker, yogurt maker and slow cooker (and likely six other small appliances)
The six quart Instant Pot Viva was on sale at Canadian Tire so we picked one up and have been experimenting with great success. Way easier and far less hassle than a pressure cooker on a burner.
This recipe has been created especially to work for a low FODMaP diet, and a low histamine diet, both of which we are dealing with on a daily basis in our house.
I served this to some of our closest friends tonight and they insisted I share the recipe. Would have taken a picture of the gorgeous rib dish but there wasn't a drop left..... so I took a photo of them eating butterscotch brownies and playing music instead.

Cut the ribs into 2" cubes and sprinkle with salt and galangal and/or lemon grass powder. Chill. Preheat the oven to 350F with an oven-proof dish hot & ready for the pieces of browned pork. Preheat olive oil in the Instant Pot on "saute". When hot, start browning a few pieces of the pork at a time in the oil. Don't try to cook too many at once as it will just steam, not brown. As you brown the pork pieces, place them in the pre-heated oven. Once all the meat has been nicely browned, (and is in the hot oven,) turn off the Instant Pot and carefully pour off the fat.
Pour the brown sugar, vinegar, ginger and water into the pot. Heat on "saute" until bubbly. Switch off.
Place the pork pieces back into the Instant Pot, put the lid on and turn the valve to "sealing". Turn on "Pressure Cook" for 35 minutes. 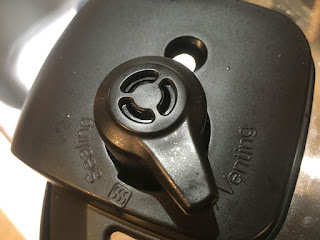 When done, switch off and let the pot sit for 10 minutes, while you preheat the broiler and prepare a pan.
Then release the pressure by switching the valve to "venting". Carefully place the pieces of pork on a broiling pan and place under the preheated broiler. Watch carefully to make sure you don't burn them! Meanwhile heat the sauce left in the Instant Pot until reduced by about 1/2.
On a nice serving dish, place the pieces of pork. Pour some of the sauce over and serve the rest of the sauce in a gravy boat. 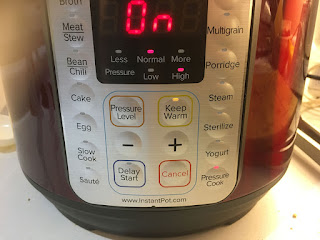 ** It is important to prevent histamines from forming as you are preparing the meal. So, be sure to keep the meat as cold as possible before putting it into the hot pan, and don't cook over low heat. You need to heat the meat as quickly as you can. Once the meat dish is cooked, serve immediately, and chill leftovers as soon as you have served the dinner.
ramblings of Nicole Narbonne