It's prawn season on the west coast of British Columbia, and thanks to my daughter Caty for bringing us our first feed of the season! We had to come up with a recipe that was full of fantastic flavour .... and this is it! 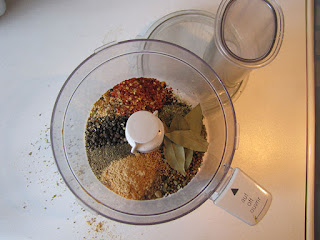 Dry saute in a cast iron or non-teflon pan over medium heat: pickling spices, mustard seeds, peppercorns, pepper flakes and celery seeds until they start to brown and some of the seeds just start to pop. Grind with a mortar & pestle until broken up. Pour into blender or food processor. Add salt, ginger, oregano, dried celery leaves and bay leaves and process until a course grit. Store in a glass jar in a cool dark spot.

To cook prawns add 1/4 cup of spice to 2 gallons boiling water and 1/2 cup vinegar. Add prawns. Boil just until cooked. Depending upon the size of the shrimp or prawns it can be as little as a couple of minutes, so pay attention. Remove the seafood from the liquid with a slotted spoon and either serve right away or chill quickly.
This seasoning mix can be used for crab or lobster as well.